Have you been following the dust-up about Veronica Roth's Allegiant? In the first place, this is a fascinating exercise in the question of what readers think they are owed.

SPOILER ALERT: Do not read on if you do not want to know how Allegiant ends.

The 3rd installment of Veronica Roth's bestselling Divergent trilogy was published two and a half weeks ago. Immediately, the book garnered several one-star reviews on Amazon. As I watched, those reviews went from 25 one-stars the day after pub date to now 768 of them. This is where things stand now: 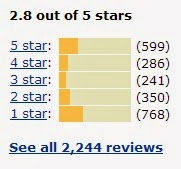 Compare that to the series opener, Divergent: 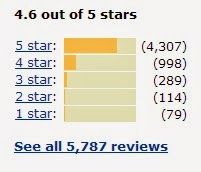 Ouch, right? It's clear that fans of the series felt major disappointment after reading book #3. Readers have been rabid about the series finale. Apparently it is not okay to kill off your main character at the end. Harry Potter lived. Katniss lived. Readers are holding it against Ms. Roth for writing Tris's death, no matter how poignant.

Now, I would have expected the Goodreads ratings to be similar, especially on a bestseller book. But that's not the case. Since the beginning, Goodreads rankings for Allegiant have been kinder. And that trend has held on for the long haul, well past even a generous number of ARC reviews:

What do you think is going on, here? Is there something different about the Goodreads audience which diverges from those Amazon? (Pun intended.) Could it be that when people feel cheated, they naturally complain to the vendor?