Author Petrea Burchard proves: Everything Will Take Longer Than You Think It Will 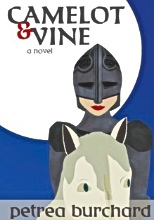 Part One
While querying for my novel, Camelot & Vine, it quickly became clear that conventional publishing would not be for me. "King Arthur doesn't sell," was the typical response.

Self-publishing was expanding faster than my waistline did while I practiced daily butt-in-chair to finish the book. It's a no-brainer, I thought. I'll publish the book myself. It'll be a snap!

Let's quickly move on to

Part Two,
where I discovered that self-publishing is not a snap. In fact, it's a lot of work, and Everything Takes Longer Than You Think It Will.

I wasn't the first of my friends to self-publish. Two of them had used the same hybrid publisher-who-shall-remain-nameless, who told me she adored my book and couldn't wait to publish it, then ceased responding to my emails. (I think her kids got busy, or maybe she had errands.) Because I had sent materials, I wanted to give her time to go over everything, so this set me back two months.

Because Everything Takes Longer Than You Think It Will, I recommend you don't announce a publication date until your book is actually published. Otherwise, your friends will ask, "What's taking so long?" You'll find yourself feeling like you're making excuses, explaining publishing processes folks aren't really interested in, trailing off in the middle of sentences...

After the first setback I decided, What the hell? I'll do the whole thing myself. After all, that was my initial plan, and that way no one can slow me down. Plus, everybody's doing it, how hard can it be? Sure, I'll hire a designer and an editor. But I'll do the rest. I'm a control freak. This is my cup of tea.

I proofread Camelot & Vine so many times before and after uploading it, I've practically memorized it. I had three other proofreaders, all of them pros, and still there are a couple of passages that make me cringe. The cool thing is, because I'm in charge, I can change them if I want to. Then again, I've been working on Camelot & Vine for so long, maybe it's time to move on.

Once the text was uploaded and proofread to death, it languished in the online CreateSpace files while my designer and I tried to figure out how to deal with the error messages we were getting as we uploaded the cover. Your file is too small. Your file is too large. Your file is so teensy weensy that we can barely see it. Your file is wide enough to drive an ocean liner through.

This kind of road block learning process seems to happen at every step. It's just one more reason not to notify your Facebook friends, blog readers and Twitter followers that the book is ready for publication before it's actually published. You think it'll be ready in two weeks? Maybe, but keep it to yourself. Say, "Coming soon!"

But never fear. There is a Part Three.
If you're going to self-publish, it's important to know you are your own master. You are also your own slave. It was harrowing. I couldn't sleep. I had migraines. I couldn't eat, yet I didn't lose an ounce. And it was worth it. Six months later, I have a book. A novel. It's a great summer read called Camelot & Vine (did I mention that?) and you can get it anywhere books are sold online. It's getting good reviews. Some are even from people I don't know.

Everything Takes Longer Than You Think It Will, and that's okay. I wanted a good book, not a fast book. And I have more than a book to show for my pains. I've become a publisher. And look out, world, I'm about to become a marketer.

Petrea Burchard finally had to write about her 30-year acting career. That need resulted in her popular humor column, Act As If, on Nowcasting.com. It was while studying Shakespeare one summer at Oxford, England she got the idea for Camelot & Vine, and she had to write that, too.
Posted by Sarah P