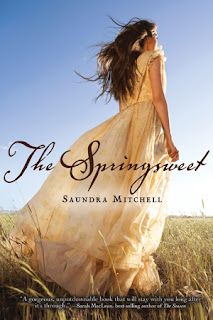 Author Saundra Mitchell has a new book coming out next month: THE SPRINGSWEET. Isn't the cover pretty? Saundra has some experience with the launch process, and also much needed perspective. God, I love this post. And I really needed to hear it right about now. Thank you Saundra for sharing it with Blurb is a Verb. --Sarah P.


By Saundra Mitchell
Dear Debut Authors,
2012 is here, and you’re no doubt freaking out. Will you make foreign sales? Audiobook sales? Will you sell at all? Why isn’t your cover up on Indiebound? Why is the wrong cover up on Amazon? What if nobody wants to interview/guest blog/blog tour you? Why did that person on Goodreads just give you two stars for a book that’s not even off your hard drive yet?! What if none of the other authors like you? What if the booksellers hate you? How do you do a launch party!? Do you need a launch party!?
What if you don’t have anything and that author there has EVERYTHING? Will your book be in the catalog? The catalog for Bologna? What are they saying at Bologna? London? Frankfurt? Why haven’t you sold another book yet? What if this first book in your series tanks, oh god, you have two more books to come after it! What if Kirkus hates it? What if Kirkus ignores it? What do the B&N rankings mean? What about the Amazon rankings? OH MY GOD WHAT DOES THIS BOOKSCAN MEAN!?