Nothing gives me more pleasure than to introduce my friend Rosemary DiBattista. This is one blog post with a very happy ending. Be sure to read the bio ‘graf… —SP 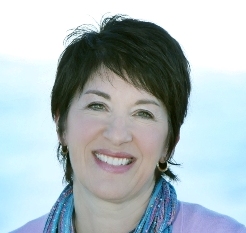 As I was headed out the door one recent evening, my 18 year-old son flashed me a grin and pointed to my classic cardigan sweater and scarf combination. “Is that your writer’s outfit?” he asked.

It was true that I’d stood in front of my closet looking for an “up-and-coming author” ensemble, having a mini fashion crisis that led me to question a fact universally acknowledged by writers—that even those of us who dwell in the land of Almost There must begin creating a brand. And it’s not just decisions about what to wear, but whether to blog or tweet or Facebook. And let’s admit it: it’s more than a little awkward to go out there and promote a book that exists only in your Word files.

Nevertheless, when I was invited to speak to a newbie writers’ group at my local Barnes and Noble, I jumped at it. When they asked if I required a fee, I said absolutely not: other writers had helped me along the way, and I wanted to pay it forward whenever I could.

And that was true, though I did hope to get more out of it. My primary reason for saying yes was to get my name out there and garner some hits on my website. But a funny thing happened on the way to my marketing opportunity: by the time the evening was over, I was reminded of why I write in the first place.

So, wearing my best “writer’s outfit,” and armed with a stack of freshly minted promo cards, I arrived at the store hoping for a decent turnout (and fluorescent lighting that wouldn’t reveal too big a disparity between my postcard face and my real one.) From the welcome the group gave me, you’d think it was Jennifer Egan who was joining them instead of a not-yet-published wannabe. An eclectic group, there was a youthful grandmother who had done some writing decades earlier; a technical writer who explained that she “wanted to write something people might actually like to read”; an attorney slash soccer mom; a middle-aged dad who writes children’s stories; a twenty-something memoirist, and a young sci-fi writer.

After the introductions, the pretty grandmother leaned across the table, her eyes shining. “So, we hear you’re launching your first book.”

“Not yet,” I said cheerily, my writer’s heart contracting just a little. So I explained what it means to have your work out on submission. Then I had to define “publishing purgatory.”

I expected questions about the changes in publishing, finding an agent, writing query letters, and handling rejection. But this group was much more interested in the process of writing. Do I base my characters on real people? (Hardly ever.) What do I do when I get blocked? (Get up and take a long walk.) Do I actually hear voices in my head? (All the time.) How do I work out my plotting? (Very badly.) What do I do about periods of doubt? (Ride them out until I love my work again.)

When I finally looked at my watch, I realized I’d been talking for more than two hours. I handed them some promo cards and wrapped things up. They thanked me and tried to buy me coffee, admired my publicity photo and wished me luck, assuring me I’d have a book contract in no time. Their optimism was touching, and more than a little contagious.

As I drove home, I wasn’t thinking about whether they’d look at my website or tell their friends about me or even if they’d buy my book once it came out. Instead I was thinking about my next project and how soon I could sit down at my computer again. For a little while, I felt just like I had at the beginning—when nothing was more important than the story, and my writer’s dreams were still bright and shiny as a new penny.

And that, my friends, was worth a whole lot more than a few clicks on a mouse.

A Jersey girl born and bred, Rosemary DiBattista left her heart at the shore, which serves as the setting for much of her work. She happy to report that her stint in publishing purgatory is officially at an end, as she is currently at work on the Casa Lido mystery series for Penguin/NAL. The first book, Murder Marinara, is slated for publication in early 2014. Rosemary is also the author of two Shakespeare-inspired romantic comedies and a non-fiction book for teens. Visit her at www.rosemarydibattista.com.