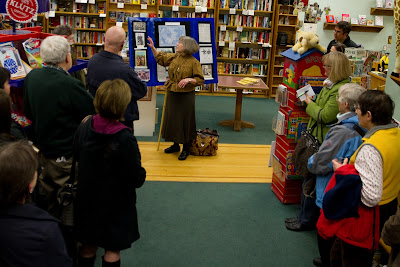 For the debut of my first book, The Year We Were Famous, I was advised to set up a website, tweet, Skype, blog, prepare a PowerPoint talk, make a trailer, print bookmarks and postcards, and get active on Facebook. Trouble was, I still didn’t have a cell phone and my attempts to figure out Skype, Facebook, PowerPoint, and all the other reportedly essential elements of today’s book marketing were pathetic.

I hired out the website, trailer, and bookmark design, but decided that rather than spend any more time learning the high-tech promoting tools most new authors were using, I’d draw on what I already knew—puppet  show costuming and props, from my days as a children’s librarian back in the 1960’s.

Costume
I began by costuming myself like one of my old puppets. Clara Estby, the narrator in The Year We Were Famous, was a young woman of 1896, so I found patterns for a Gibson Girl blouse and spent a weekend sewing. I found an appropriate skirt at a thrift shop and bought reproduction high-topped shoes. 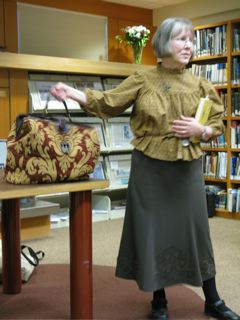 Props
Clara and her mother had walked 4,000 miles from Spokane to New York City carrying only what would fit in small satchels, so I started with a satchel I found in a catalog of Victoriana. A year before launch, I began the search to fill the satchel with replicas of everything newspaper articles mentioned in their interviews of Clara and her Mother as they crossed the country.  I combed antique stores and specialty catalogs, bid on items on eBay, and begged loans from relatives.

What I found or made for my satchel:

Authentically styled under-drawers with no seam up the middle, which made it easier to answer the calls of nature. It took a week of evenings to put in flat-felled seamed gussets and rows of pin-tucked ruffles, but this item has been the hit of every program. I did not model them.

High lace-up shoes – I did walk a mile in them just to say I did it, but would not choose to wear them every day.

Toiletries: hand-made soap, wooden-handled toothbrush, a small canning jar of baking soda and salt they would have used for tooth powder, and a hand towel I wove of linen and cotton.

Backdrop
My backdrop was a 36” X 48” tri-fold foam board, big enough for a map of Clara and Helga Estby’s trek across the country, period postcards, copies of newspaper articles, and a photograph of my real-life characters. I covered the panel with black Velcro sold by the yard on the internet, sandwiched newspaper articles between layers of transparent shelf-liner (available at drugstores) and applied self-stick Velcro dots (available at fabric stores) to the backs of each item.

Once I had a costume, props, and backdrop, I was ready to take the show on the road! In the next few months I visited four bookstores, a book festival, two libraries, three middle schools, three book clubs, a trade show, and a museum. Ten bookings have already been scheduled next year with women’s groups and book clubs, a library, and another historical society. 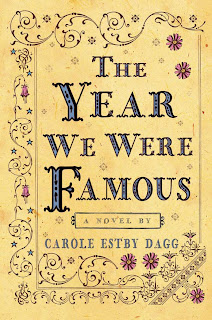 The Advantages of Low-Tech:

Realia broadens the appeal of programs. My show and tell has gone on the road to a wide range of audiences from 5th-graders to adults interested in women’s history.

Objects provide a crutch for an off-the-scale introvert. Just as I hid behind the puppet stage for library performances, I hide myself in my costume and use my collected props as memory aids when shyness-panic threatens to short-circuit my brain during a presentation.

I have more than a reading to offer bookstores, schools, community groups, book clubs, and historical societies. I’m not just plugging my book, I’m offering a program on the role of women in the 1890’s.

My props are relatively light-weight, inexpensive, and disaster resistant. Venues don’t have to have screen or computer projector and I don’t have to worry about bulbs burning out or cord compatibility.

Realia increases audience involvement. Attendees can come up after a program to examine the items they are particularly interested in and ask more questions.

Touchable objects and newspaper articles reinforce the point that The Year We Were Famous is based on a true story.

This approach won’t work for every book, but in the panicked rush to new technology, don’t overlook the power of old-fashioned show and tell.

You can visit Carole at www.CaroleEstbyDagg.com, see her trailer here: http://www.youtube.com/watch?v=32EWPJt8i_A. Her book is: The Year We Were Famous
Would you walk over four thousand miles to save your family's home?
(Clarion Books, an imprint of Houghton Mifflin Harcourt, April 4, 2011)
Posted by Sarah