I bought Sandra Beasley's wonderful memoir Don't Kill the Birthday Girl just after it was published. On the back jacket flap there's a perfectly nice author photo—good quality, not too serious, not too silly. (And she's not doing the chin-in-hand "thinker" pose.) No one would quibble with that. Or would they? —Sarah P.

When my editor called to ask if I was game to have part of my memoir, Don’t Kill the Birthday Girl: Tales from an Allergic Life, excerpted in a major magazine, I let out a yelp of joy and jumped into the air.

This startled my parents. We were on the third floor of a concrete parking lot in Charleston, South Carolina. For them, Charleston was a weekend getaway. For me, the night’s poetry reading was the first stop of what was going to be a travel juggernaut: five towns in two weeks.

“So, I take that as a yes?” my editor asked on the other end of the line. 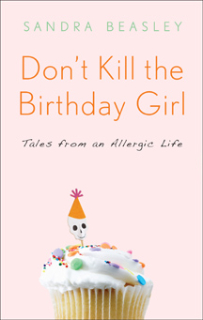 Yes, yes, yes. My memoir’s cover would be splashed on the pages of a magazine whose circulation is counted in the hundreds of thousands. I could add their title to my list of pub credits. Best of all, I’d already done the work.

They wanted a thousand words within the week about how food allergies complicate one’s love life, focusing on a past relationship I’d described in the memoir. My editor at the magazine helped me splice together two parts of the book into a coherent piece that had arc and oomph. Then they asked for the photo.

“I thought they gave it to you,” I said. My publicity team at Crown had my author headshot, one of a series I’d taken at the National Cathedral with a professional who took pity on a poor poet. All rights cleared, high resolution, it is The Photo.

I sent other images from the shoot, ones that hadn’t been in print elsewhere. They replied they wanted something more candid. Hmmm.

They asked about using a snapshot of me with the boyfriend from the excerpt. Poor taste, I wrote back, given we weren’t together anymore. He’d let me write about him; no way was I volunteering his face to be seen in waiting rooms across America.

We were off on the wrong foot. I sent a photo taken at Medicine Wheel in Wyoming, my hair whipping around my face. Too casual, they said. I sent a photo from the launch reading for my last poetry collection. Once they cropped my grandmother out, they said, there wouldn’t be enough left. I spent hours combing through Facebook albums, only to realize you can’t get a 5” x 7” photograph at 300 dpi off Facebook.

We were past deadline. This didn’t need to be complicated, they said, reminding me that Crown had promised I could provide art. Surely I had something on my camera that was relevant to the essay—a recent picture that showed me cooking, some scene with food and friends. A dinner party? A brunch? A friend’s baby shower?

I was mortified. Mortified I was coming off like an unhelpful author. Mortified they might cancel the excerpt. Mortified that scrolling through 365 days worth of images, I didn’t have one that showed me with “food and friends.”

“I don’t get to host dinner parties. I don’t go to baby showers,” I sobbed to my friend, a fellow writer. “I go to bookstores. I go to classrooms. I’ve been on tour for a year!”

It was 2 AM and my nerve had broken. I was in Brooklyn, on the final leg of a jaunt that had taken me as far west as Mississippi, then back again. I was tired of crashing on couches. I needed a bath. I’d come to hate the red and black clothes that I always wear on the road.

The next morning we tried to stay relaxed despite looming commitments—she was taking a bus out of town, and I was due at a campus in Long Island. I stayed in my pajamas. I resisted putting on eyeliner. I sidled up to the stove, stirring the pot of oatmeal, and smiled for a test shot with my camera.

She took the first picture. Then, as we watched in helpless wonder, the lens retracted like a turtle withdrawing into its shell. The battery had spontaneously died.

“You have got to be kidding me,” I said.

Rifling through kitchen drawers turned up AA batteries long corroded. She disappeared into her bedroom to search for more. My shoulders slumped. There wasn’t time to run to the corner store, then re-stage the scene. I barged in after my friend to tell her that there was no point, that we should sit down and enjoy breakfast—

The editors didn’t use the photo, of course. 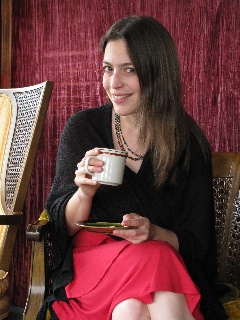 Nor did they use any of the photos a friend took of me an hour later, in a coffee shop where the only other patrons were in an Alcoholics Anonymous meeting (which made it a little awkward to get out a camera). My coffee had come in to-go cardboard. I went back and ordered tea for the sake of a more photogenic cup and saucer. I used a shawl to cover up my red dress’s epic color clash with the maroon crushed-velvet walls.

They also didn’t use the photos taken by the poet-professor whose class I’d visited, snapped at the Greek diner where we ate lunch. Battling fluorescent lighting and mirrored walls, we jumped to a better table—resulting in the visual non sequitur of an untouched place setting under my salad. We kept catching waiters in the background.

Nor did they use the bright, composed, mega-pixel photos my sister took with her fancy camera when we met for breakfast on P Street, hours after my return to DC. 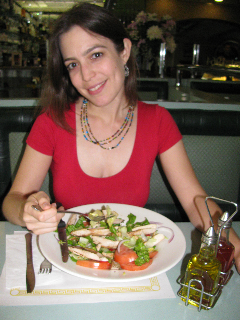 Nope. The magazine went with the graphic of skull and crossbones on a plate.

I am left with this roster of photographs that I recognize as me at my most worn out: a bit puffy faced, a bit raccoon-eyed, and absurdly posed with a spoon, a hovering fork, a bite of bagel. All to promote a memoir dedicated to my uneasy relationship…with eating. Luckily, each photo holds a memory of being helped, that kindness, how hard we laughed at the absurdity of the task before us.

Turns out you can steal moments for “food and friends,” even on an endless book tour.

Sandra Beasley is the author of Don’t Kill the Birthday Girl: Tales from an Allergic Life (Crown, 2011), as well as two poetry collections: I Was the Jukebox (W. W. Norton, 2010), winner of the Barnard Women Poets Prize, and Theories of Falling (New Issues, 2008), winner of the New Issues Poetry Prize. She lives in Washington, DC. You can find more info at www.SandraBeasley.com and follow her on Twitter at @SandraBeasley.
Posted by Sarah