Buying Internet Advertising For Your Book: Part I

As I troll the internet while I should be writing my next book, I see a great deal of advertising.  Three years ago, I decided to try my hand at turning the tables.  The Ski House Cookbook (Clarkson Potter, 2007) made a great test candidate for internet advertising because:
A)     The audience is so tightly defined—skiers who cook (or who love people who cook).
B)      Its sales have a highly seasonal component.  There’s no point in advertising this book in July (except perhaps in Chile!).  And it makes a great wintertime gift book.
C)      While easy to define, the audience is spread across a wide geographic area.
First stop: Google’s advertising arm, known as AdWords. (https://adwords.google.com/).
Adwords sells the ads that appear on search pages, gmail and blogger.  But other sites hire out their ad revenue to Google too.  For example, Google is in charge of the advertising on MySpace, certain newspaper websites and other groups.
The best thing about AdWords is that you can dip your proverbial toe into advertising.  My “ad budget” on AdWords stood at $1 per day.  If you set up a one month ad campaign, there is no way it will cost more than $30 plus a $5 activation fee.  But there are a few terms you’ll need to know first.
Google’s advertising is Pay-Per-Click.  Google shows my little text-only ad on various sites, and once in awhile someone clicks on the ad.  This is called a “Click Through.”  Each click-through cost me money—at a rate determined by a lightning fast Google ad budget auction.  But I’d set a maximum pay-per-click at $0.50.  In other words, after I get two click-throughs on Google, my daily budget was usually maxed-out, and Google did not show my ad again until the next day.
The clicks were driven to a website I created for the book.  That site describes the book, and offers three ways to buy it.  (IndieBound, Amazon, B&N).  There is cover art, a list of national publicity hits for the book.  (“As seen in Sports Illustrated, The Nest, USA Today…” etc.)  I could also have chosen to drive traffic right to the purchase page on Amazon, but although efficient, I didn’t want to choose a vendor on behalf of my buyer.
But the click-throughs aren’t all I get for my trouble.  Google also counts “impressions,” that is, how many times my ad is shows up in front of someone’s eyeballs on a Google page.  Here are my early stats from Google:
Days of advertising: about 30
Impressions: 55,617
Successful click-thrus: 37
Click Through Rate: 0.07%
Average CPC (Cost Per Click Through): $0.41
Total Cost: $15.35
Average CPI (Cost Per Thousand Impressions): $0.27
Looking at those numbers, you could make either case—my ad campaign was either a dismal failure or a smashing success.  On the one hand, only 37 people clicked on the ad in a month.  That is not the stuff on which best sellers are made.  On the other hand, Google put the name and gist of my book in front of fifty five thousand people.  And those people were all either searching or browsing ski sites—equipment vendors, aficionado sites, etc.
This is how the ad looked:
The Ski House Cookbook
Ski Fast & Eat Well:
125 of the Best Winter Recipes
sites.google.com/site/skihousecookbooksite
Perhaps my lousy click-through rate was due to my placement on the page, which is another stat that Google tracks.  And my ads were frequently the fourth one down on the page.  I’m kind of a cheapskate, and a maximum price of $0.50 per click is not much money in Google land.  (Isn’t that weird?  All those diet plan ads you see smack on top of your screen are willing to pay almost a dollar for your clicks.)
I’ll also have you know that Google Adwords has a fairly complex setup.  It is very rich in data—it favors those who are going to sell a million bazillion widgets this year.  You could set up ten different ads on Adwords, each with its own budget, and then pit them against each other, mapping in intricate detail which words generated the greatest click through rates.  (“Six Pack Abs By Next Week!” vs. “Babes Will Want You”)
Second Experiment: FaceBook
All this geeking out in front of AdWords had me wondering about those pesty FaceBook ads.  Could they be attainable?
Yes they were.  Not only was FaceBook almost the same price, but you can include your cover art, and you can really drill down to the customer you want—as long as you can define her.  My Ad on FaceBook looked like this (but smaller):
Best Gift for Skiers 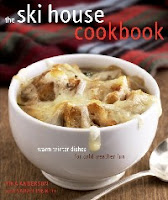 The Ski House Cookbook: Always appropriate-
always fits!
And better yet, I got to set specific parameters for who could see it.  The ad only appeared to FaceBook users who were A) over 24 years old, B) speak English, C) live in the U.S. and, my favorite, D) listed “skiing” as one of their interests in their “info.”  Eureka!  At least when I paid for a click, that click belonged to a skier.
My daily budget on FaceBook was $1.44.  (I think I put in $1 first and it told me that was too low.)  So I only paid for about three click throughs per day, but got maxed out every day.  The stats were:
Days of advertising: about 13
Impressions: 76,247
Successful click-thrus: 38
Click Through Rate: 0.05%
Average CPC (Cost Per Click Through): $0.49
Total Cost: $18.72
Average CPM (Cost Per Thousand Impressions): $0.28
FaceBook Campaign, 2.0
Then, during December, the lightning fast auction that determines cost-per-click got really expensive.  (I guess I wasn’t the only girl who chose to advertise then.)  The result was that my ad wasn’t shown at all for a few days because the amount I was “bidding” per click was too low.  With no impressions to speak of, I tweaked my formula a bit.  FaceBook also allows you to “PPM”, which means pay per thousand impressions.  So I “bid” 28 cents for each thousand impressions, and suddenly I was in business again.  For the last 11 days of the Christmas shopping season, I got these stats:
Days of ads: 11
Impressions: 63,678
Click-thrus: 33
Click through rate: %0.05
Average CPC (cost per click) $0.55
Total Cost: $18
Average CPM (Cost Per Thousand Impressions): $0.28
Recouping Part of the Cost
I went into this little project hoping to increase the visibility of my book during the holiday shopping season.  I was ready to declare victory if the total budget was under $100, and my sales ranking improved over last season’s.
But here’s the fun part—I got Amazon.com to pay for some of my advertising.  Remember when I told you I built the book its own web page?  On that page, I put three links for purchase—one to Amazon, one to IndieBound, and one to BN.com.  But I didn’t just want to link to the front page of Amazon, I wanted it to look good, and I wanted it to go straight to the “purchase page” for my title.
Amazon runs an Affiliates Program, which pays website owners a cut for referrals.  I “applied” for the affiliates program by filling out a few details directly onto my pre-existing Amazon.com account.  Then I used their simple software to create links to my book’s purchase page.  But this wasn’t just any link—it was a link that named me as the referring party.  So I got 4% of the subsequent order.  The groovy thing is that if someone uses your referring link, and then buys something other than your product, you still get paid!  I earned—I swear to God—4% of a stranger’s purchase of the Twilight DVD, and of another stranger’s purchase of Super Freakonomics.  And of course, several people bought my actual book.
I did just the same thing for BN.com (which is run by the Google Affiliates Network) and at IndieBound.  Neither of those vendors makes things as easy as Amazon does, unfortunately.
And Now What?
I spent a total of about $57.00 to show my ads a total of 220,000 times.  And I learned a ton.  Unfortunately ad costs have risen quite a bit in the past three years.  The same ad campaign run today would cost two or three times as much.  But try playing around with the ad possibilities at Google & Facebook even if you’re not sure you want to spend the money.  Tinkering is free, and the very act of designing your ad and choosing your target market is brain food.  I guarantee you’ll learn something.
Posted by Sarah