In Which Books Can Be Sold on the Moon 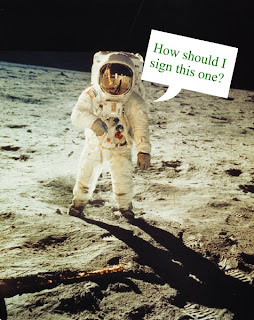 We had a lot of fun at the Ski House Cookbook kick-off party, held at groovy Aspen Bar on 22nd St.  But we hired a tiny little company someone recommended to sell books at the party, and that part was kind of a disaster.  The seller only brought 30 books, and they were instantly sold out.  Perhaps we should have let them know that the room would be full of tipsy photographers who were all eager to kiss up to my co-author Tina (a magazine editor).  Our bad.  We could have sold many more books that night.

But get this-- the under-performing bookseller was also charging (gasp!) a $3 more per book than the cover price!  This was late 2007, and perhaps it was the last time that any book ever sold for a premium to its cover price.  Ever.

Luckily, things just got easier in terms of bookselling on the fly.  Now it's possible to sell books anywhere, even on the moon.
Go ahead and sell your books at any gin mill where there's cell phone service, because now you'll have an easier time transacting.  I'm so excited about this funny little device called Square.  It converts your iphone or android phone into a credit card processor.  And the set-up is free.  And the fees are a clean $2.75% of the sales price.  That's only $0.41 on a $15.00 paperback, and still less than a buck on a shiny hardcover cookbook.


There are so many applications for this thing--I want to use it at fundraisers at my kids' school.  I can even picture some savvy little tot accepting credit at his lemonade stand.  Apparently it was invented by a Twitter co-founder.

One small step for man, one leap forward for on-the-fly book vending.
Posted by Sarah